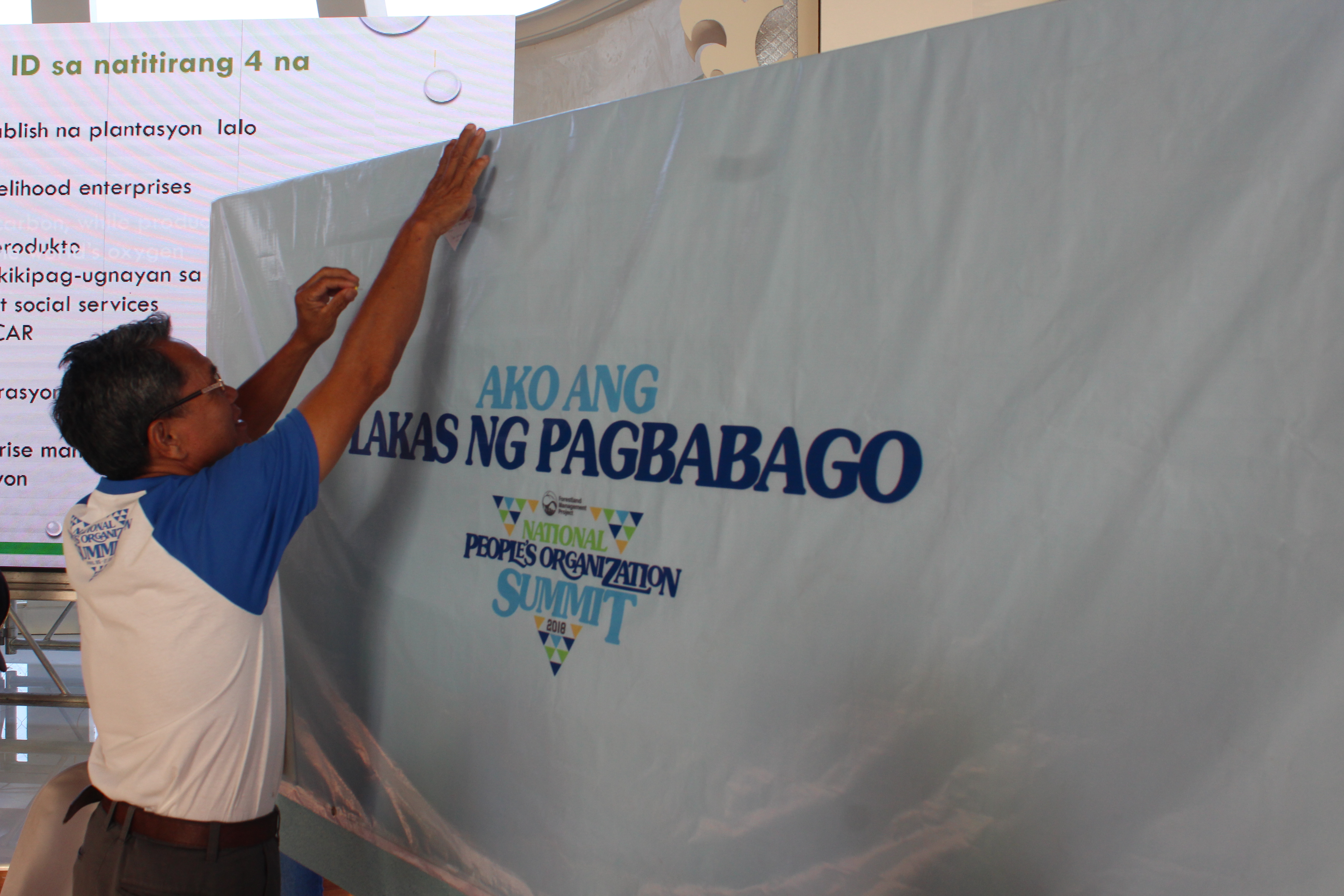 The summit showcased inspiring stories from five (5) successful FMP-partner POs. The stories highlighted their success, challenges, and good practices in implementing and achieving FMP targets and accomplishments. Community leaders pointed out how the FMP contributed to the enhancement of the quality life in participating communities. The storytelling presenters stressed how the Project has augmented their source of livelihood, primarily farming, the same way that it has made them feel esteemed in supporting the government’s aspiration to maintain the integrity of the country’s forested areas.

One of the PO presenters, a leader of an all women’s organization from Nueva Ecija in Region 3, also highlighted how the Project has empowered women in their community, by enabling them to successfully lead site development and other project activities, simultaneous to fulfilling their usual reproductive roles in the household.

Apart of from the storytelling presentations, representatives from other government agencies such as PAGASA, DTI, DOST, and Cooperative Development Authority discussed topics that could help the POs in planning and implementing their daily activities, including climate outlook for the next six months, microenterprise assistance and services, enhancing product packaging, and establishing cooperatives, respectively. There was also a discussion on the status and updates regarding project components on agro-support facilities and institutional development by FMP’s infrastructure and project management specialist.

Heads of FMP’s oversight agencies were also present during the Summit.

Sharing the significant milestones and accomplishments of the Project was For. Nonito Tamayo, Director of Forest Management Bureau and Project Director of FMP. He noted how the FMP, since its inception, has contributed to sustaining the country’s forest cover. The outlook for the next four years before the Project ends is bright notwithstanding the challenge to efficiently accomplish site development targets in the remaining areas. It is the desire of the Project to equip POs and empower them to take part in their respective local watershed management councils as a strategy for sustainability.

Ms. Ayumu Ohsima, Senior Representative of the Japan International Cooperation Agency – Philippines expressed her gratitude and encouragement to the delegation. PO participants were appreciative of her presence, especially that Ms. Ohshima visited their communities previously during earlier site validation activities.

For. Lourdes Wagan, Director of the Foreign-Assisted and Special Projects Service delivered the keynote speech by DENR Secretary Roy Cimatu, who unfortunately was not able to grace the event due to commitments to equally important matters. The speech emphasized the desire of the Department not only in implementing projects that protect the environment but also in making sure that people’s organizations in forested areas are engaged as partners in these projects.

For. Ricardo Calderon, Assistant Secretary for Staff Bureau, likewise graced the event, expressing how the FMP is close to his heart and encouraging the delegates to inspire one another as it is the power of collaboration which will make the Project even more successful. ASec Calderon also encouraged the POs to think creatively in improving their products. Notably, almost 25% of the participating POs already have an operational social enterprise, which involve value adding, trading, and product development, among others. Some POs exhibited these products during the event.

The summit ended with an optimistic outlook and a call to action from the, Forester Orlando Panganiban, FMP Project Manager, hinting the possibility of another national summit next year once the current year’s targets are achieved.

(with reports from Nephtaly Botor, FMP AP on Community Development)