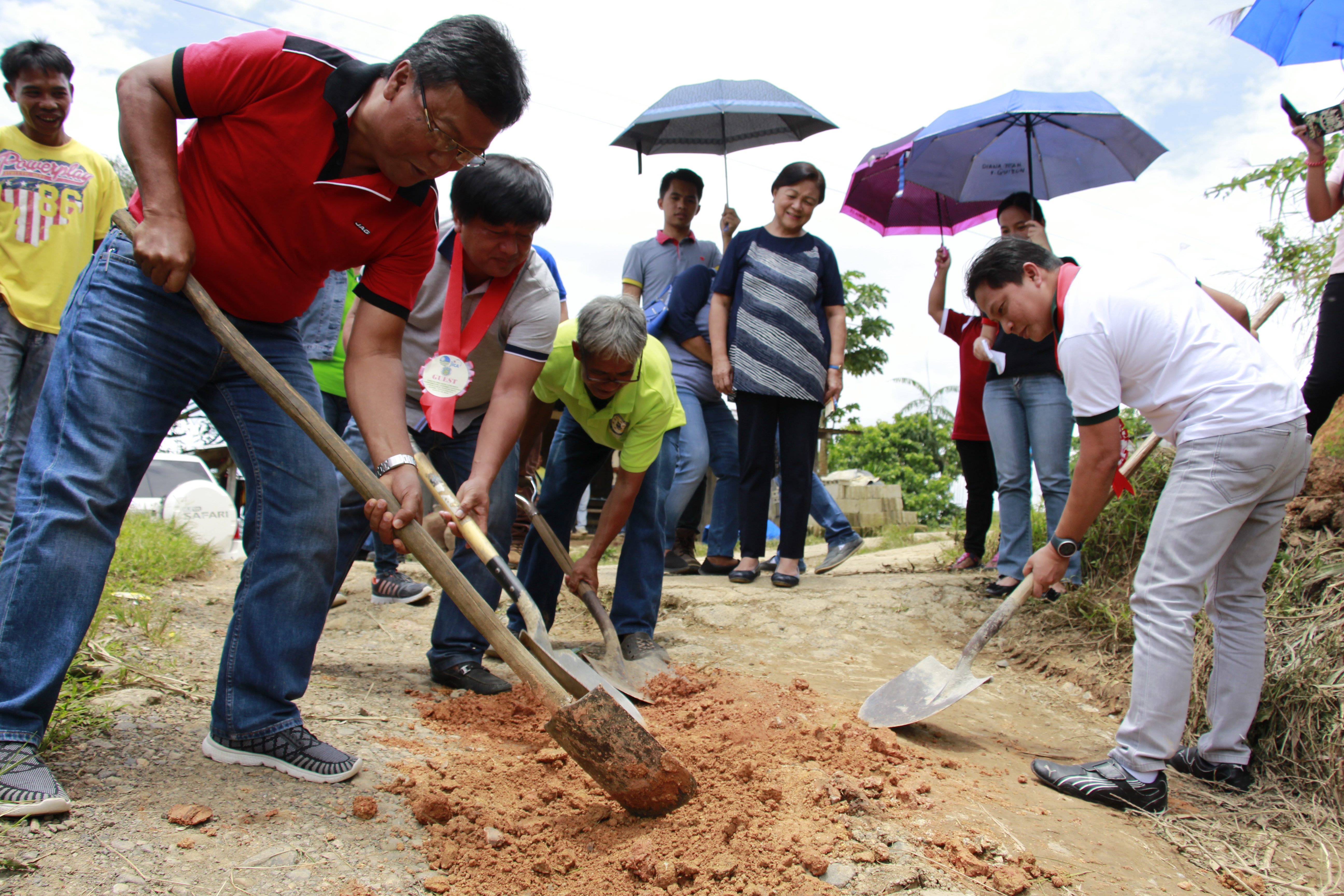 A dirt road in an upland village in Kasibu, Nueva Vizcaya will soon be paved as its rehabilitation officially kicked off on August 16, 2018.

The construction of the Brgy. Nantawakan Tire Path finally broke ground, bringing promises of the better accessibility and transportation for its proponents. The road project was proposed by the Bingo-Nadalin Upland Farmers Association Inc. (BNUFAI), a partner people’s organization of the Forestland Management Project (FMP), and endorsed by officials of the Barangay Nantawakan and the Local Government of Kasibu.

The 3.707-kilometer concrete road, amounting to 16.8 million pesos, is funded under the Agroforestry Support Facilities (ASF) subcomponent of FMP. The road rehabilitation project primarily intends to ease the access to the 863-hectare agroforestry and forest tree plantations established by the Project’s partner people’s organization within the Manga Sub-watershed, an area covered by the Upper Magat and Cagayan River Basin. With an influence area of 2,300 hectares, about 820 residents of the town of Kasibu are expected to benefit once the road reaches completion by Benson Builders – the project’s contractor.

At the ground-breaking ceremony, Kasibu Municipality Mayor Alberto Bumolo said the village residents have long been dreaming of the concrete road.

“They have been longing for a tire path. That’s why we have proposed such infrastructure project,” he said in Ilokano.

Once the tire path reaches completion, Mayor Bumolo urged the village residents to take good care of it for more people can enjoy its benefits. “Let’s help each other in maintaining this road, so that it can be used for a longer time,” he said.

The local chief also called for the cooperation of the local community, so that more projects from the National Government and JICA can be extended to its residents.

“I would like to ask our residents to help our contractors and the DENR so that when future projects arrive in the Manga sub-watershed, they will not hesitate to extend help,” he shared

The need for close collaboration between the local government and the community was further affirmed by Nueva Vizcaya Governor Carlos Padilla when he expressed support to the current and future activities of the Project.

“If there are other projects they wish to add, we are here to extend help to the residents of Brgy. Nantawakan and the people organization who made the initiative for this JICA-funded road project to exist,” Governor Padilla said in Ilokano.

For. Edmundo Malupeng, FMP Region 2 Focal Person, and For. Marlon Atienza, FMP Central Project Management Office Technical and Planning Head, lauded the commitment of the local chiefs in extending their support to the fulfillment of the Project’s road rehabilitation project. They, however, emphasized that the road should primarily support the site development (SD) activities of the FMP.

For. Malupeng said, “the purpose of this infrastructure project is to support the area development under the (FMP’s) site development activities, so that later on, the people’s organizations will no longer encounter problems in transporting agricultural products.”

He, however, warned the residents that the roads should not be used in the illegal transport of forest products.

For. Atienza, on the other hand, iterated the statement of For. Malupeng in the use of roads for illegal activities that could result in the destruction of forest lands.

“There are many cases that road improvement projects have led to the destruction of forests due to their illegal conversion to agricultural lands,” For. Atienza said.

For Atienza is hopeful that the residents can conserve and protect the forest resources, while the livelihood opportunities in the uplands are improving.

Residents who will benefit from the paved road also have their hopes high once the construction reaches completion.

Alex Payacgui, village chief of Barangay Nantawakan, said the proposal of the Nantawakan Tire Path was in response to the needs of his fellow farmers.

“I saw that most farmers here experience hardships in selling their products to the nearest market due to the inaccessibility of roads,” share Payacgui in Filipino.

Priority was given to the development of the Nantawakan Tire Path through the resolution passed by the local chief together with his Sangguniang Barangay, endorsing the road rehabilitation project to the local government of Kasibu for funding under the FMP’s ASF subcomponent.

Similar to Payacgui, John T. Juan, president of BNUFAI – an FMP’s assisted people’s organization, also expressed his excitement since the concrete road will improve in trading their agricultural products.

“It will now be easier for us to transport our products to the market. Our farmers will no longer suffer in delivering their produce,” the 56-year old farmer said in Filipino.

Juan, a farmer for more than 20 years, has been farming ginger, squash, string beans, and other fruit trees. Under the site development activities of FMP, they are contracted to grow calamansi and cacao. They also plant forest trees like narra for the Project’s forest rehabilitation efforts and gmelina and mahogany for fuelwood production.

Apart from the better delivery of agricultural products, Juan said that the road improvement will enhance their access to healthcare facilities.

“It will now be less challenging to bring people with ailments in healthcare centers,” he shared.

The Nantawakan Tire Path is expected to reach completion in March 2019. It is one of the four (4) ASF infrastructure subprojects in Nueva Vizcaya.