Forest Service during the Spanish Regime (1860s – 1890s)
June 1863
The "Inspeccion General de Montes" was inaugurated under the Spanish Government pursuant to a Spanish Royal Decree under the Direccion General de Administracion Civil whose function was to determine, through data collection, the extent of the country's forest resources and oversee their proper utilization.

September 3, 1863
The Forestry Service was allowed by the Superior Civil Government to intervene in all matters pertaining to cutting, extracting timber, resins, etc. and to open up virgin lands to give concessions over mountain lands and transact business related to lands and forests.


February 1874
The government authorized the free use of timber under the gratuitous license.


November 30, 1894 The Royal Decree promulgated in Spain approved the definite Forest Laws and Regulations for the Philippine Forest Service, which was drafted by "Ministro de Ultimar". The regulations contained 138 articles under nine titles.

August 13, 1898
The Land Law of the Philippine Islands was created to designate, inventory and mark the limits/boundary of the forests belonging to the state, which shall constitute the forest zones which shall be by the Governor-General under the General Dictorale of Civil Administration. 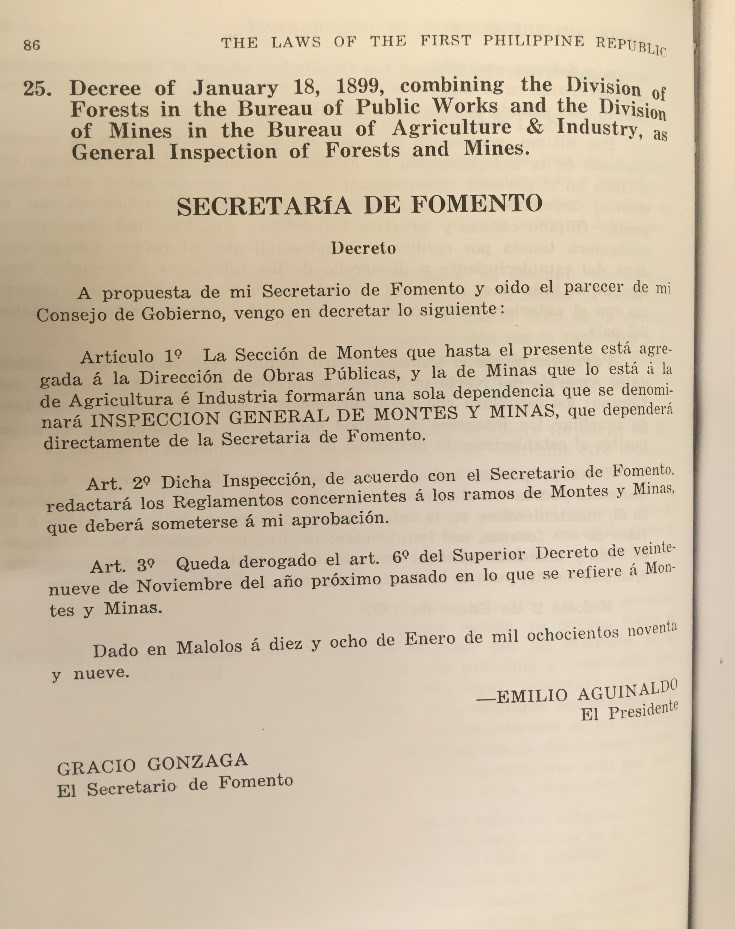 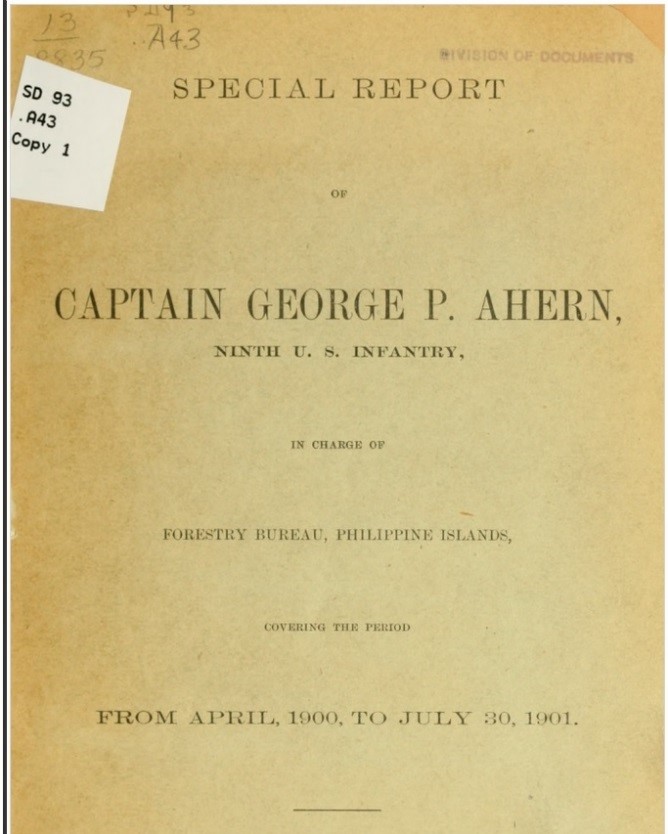 April 14, 1900
The "Inspeccion" was renamed into Forestry Bureau by the U.S. Military Governor in the Philippines with the issuance of General Order No. 50. Captain George P. Ahern, of the 96th U.S. Infantry, was named as its first Director. 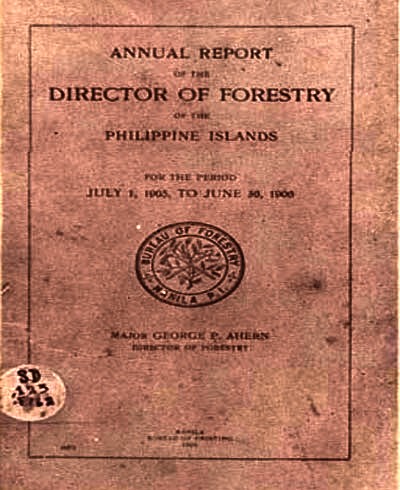 September 6, 1901
The Forestry Bureau was changed to Bureau of Forestry and was placed under the newly created Department of Interior by virtue of Act No. 222.
1910s

The establishment of the Forester’s Training School in Los Baños gave opportunity for Filipinos to be trained and educated with Forestry Science. The first generation of graduates assumes the position of the Bureau of Forestry. Oriente Building, Manila, Headquarters of the Philippine Constabulary, Bureau of Lands and Bureau of Forestry


November 18, 1916
The Department of Interior was abolished and transferred all its functions and authority to the Department of Agriculture and Natural Resources (DANR). Under Act, the DANR took "direct executive control, direction and supervision of the Bureau of Agriculture, Bureau of Forestry, Bureau of Lands, Bureau of Science and the Weather Bureau and all matters concerning hunting, fisheries, sponges and other sea products and such others as may be hereafter assigned to it by Act 2666.

January 1, 1937
Signaled the filipinization of the country’s forest service by appointing Forester Florencio R. Tamesis as Director of Bureau of Forestry.

June 8, 1939
Jurisdiction by the Bureau of Forestry over pasture areas and grazing lands was provided under Commonwealth Act No. 452.

January 30, 1942
The office became Bureau of Forestry and Fishery under the Ministry of Agriculture and Commerce by virtue of Administrative Order No. 1 as approved by the Commander-in-Chief of the Imperial Forces in the Philippines.

February 1945
After the Second World War, the Bureau of Forestry was reopened with Forester Carlos Sulit as Officer-in-Charge to continue the management of the country’s resources.

April 24, 1945
The Bureau of Forestry was reconstituted with five (5) divisions and 44 district offices. The responsibilities of the Bureau soon expanded requiring the creation of additional functional divisions and units in the central office and in the field. 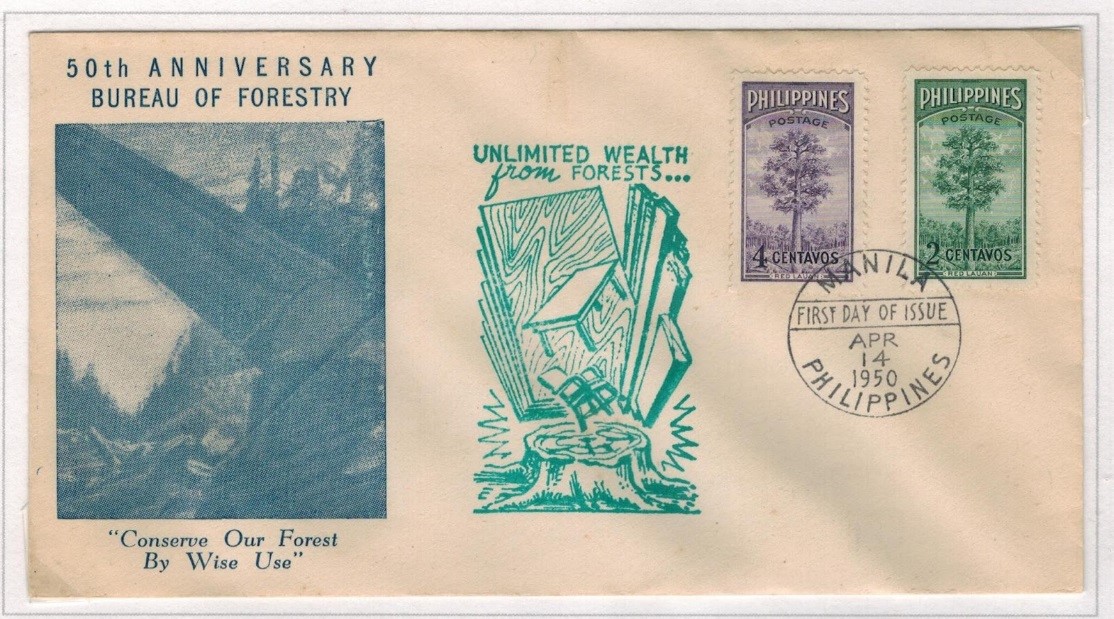 50th Anniversary of the Bureau of Forestry 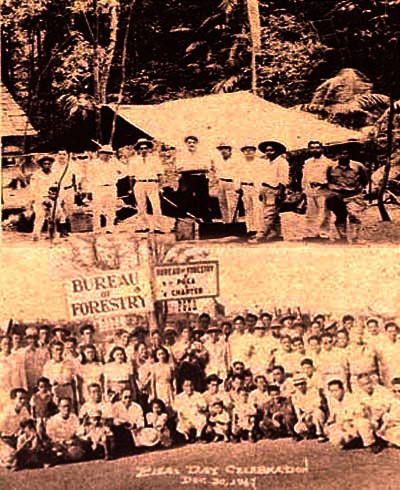 June 18, 1960
The Reforestation Administration was created to reforest and afforest bare and denuded forest lands especially critical watersheds by virtue of Republic Act No. 2706.

November 01, 1972
The Bureau of Forest Development (BFD) was created by virtue of Presidential Decree No. 1 wherein the Bureau of Forestry, the Parks and Wildlife Office and the Reforestation Administration were merged.

December 18, 1974
TheForest Research Institute (FORI), was created with the Forest Research Division of the Bureau of Forest Development as a nucleus, by virtue of PD No. 607. It is now known as Ecosystems Research and Development Bureau (ERDB) under EO 192. 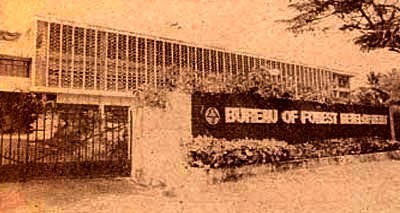 May 19, 1975
The Bureau of Forest Development (BFD) was formally organized as a result of a merger of the Bureau of Forestry, Parks and Wildlife Office, Reforestation Administration and the Southern Cebu Reforestation Project as provided in the Presidential Decree No. 705 revising PD 389 (otherwise known as the "Forestry Reform Code of the Philippines").

July 10, 1985
The Wood Industry Development Authority (WIDA) was created to regulate, control, supervise and develop the wood industry of the Philippines in all aspects. WIDA absorbed the functions of the Presidential Committee on Wood Industry Development and all the functions and powers of the BFD pertaining to forest utilization as provided by Executive Order No. 1039.

July 19, 1995
Community-based Forest Management was adopted as the National Strategy to ensure the sustainable development of the country's forestland resources and providing mechanisms for its implementation due to the enactment of Executive Order No. 263.